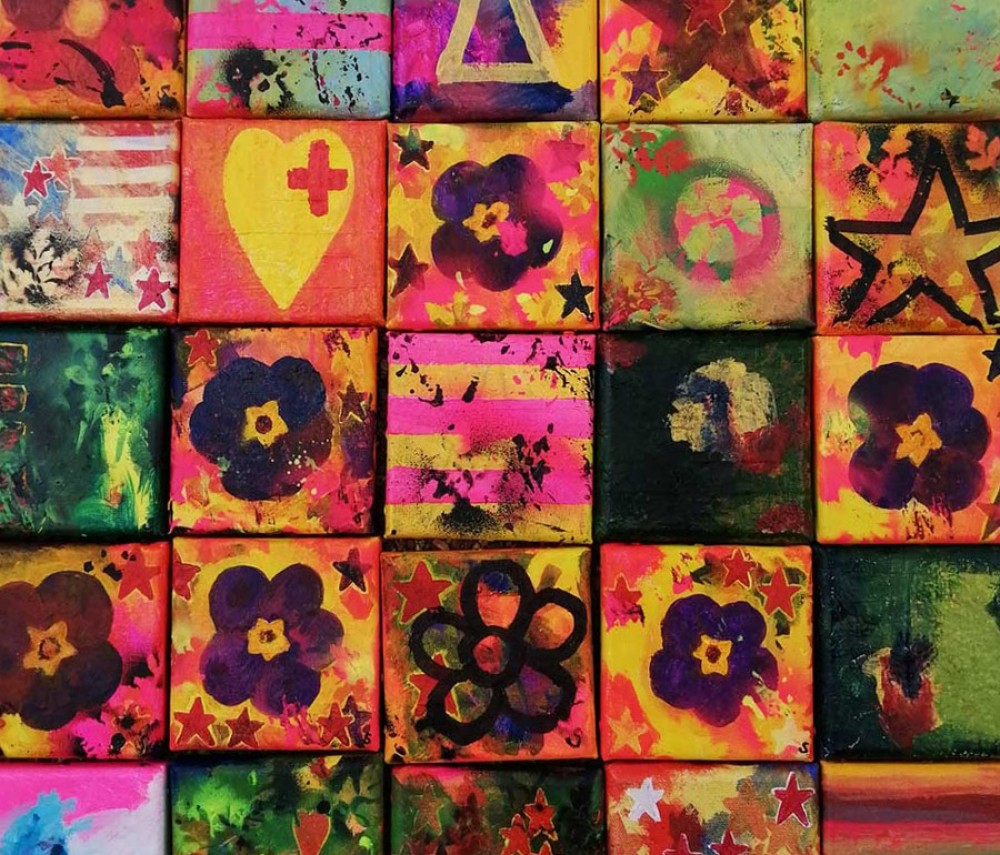 The Art Car Boot Fair has been known for being gloriously democratic and making the work of leading artists available to all in a fun and unintimidating way since 2003. However over that long and exuberant history, few artists can match Sean Worrall in terms of making their work accessible.

In 2017 he made 100 small paintings and sold them for £1 each and previous to that had a habit of regularly leaving his artwork around the place for people to happen upon and take home. Add to that his generosity to other artists and arts initiatives in his role as curator/gallerist of Cultivate, founded with Emma Harvey, plus the long history of his Organ project - in so many ways Sean epitomises the spirit of the Art Car Boot Fair. He was also kind enough to introduce us to popular regulars in our line-up; Julia Maddison and Quiet British Accent. So we thought we’d ask him to reflect on Cultivate and the punk origins of Organ and also let us know what he and Emma have in store for the our Flora & Fauna edition coming up in May. Here is his response:

'The Organ started back in the fractured art school days sometime in the last century, a handmade hand-painted zine, a beast started by two people then known as Sean and Marina Organ (well that's what everyone else called us). Marina an animator and Sean Worrall a painter, it was a punk rock thing, underground alternative music, art, underculture, broken photocopiers, typewriters, issue 4 came out on a cassette, issue 7 was fly posted on walls, mostly it was photocopied zines wrapped in hand painted covers (by issue 3 we were hand painting runs of a thousand), it was mostly sold by hand at gigs, galleries and such.

Along the way Organ evolved into a record label, hundreds (thousands) of underground gigs mostly in London, a weekly TV show well before the days of YouTube, a radio show on London arts radio station Resonance FM,  Organ itself evolved and became a full on glossy magazine sold all over the world. The last print edition came out in 2011, producing a full-on monthly magazine and running a way too busy record label was getting in the way of painting and well something had to give. 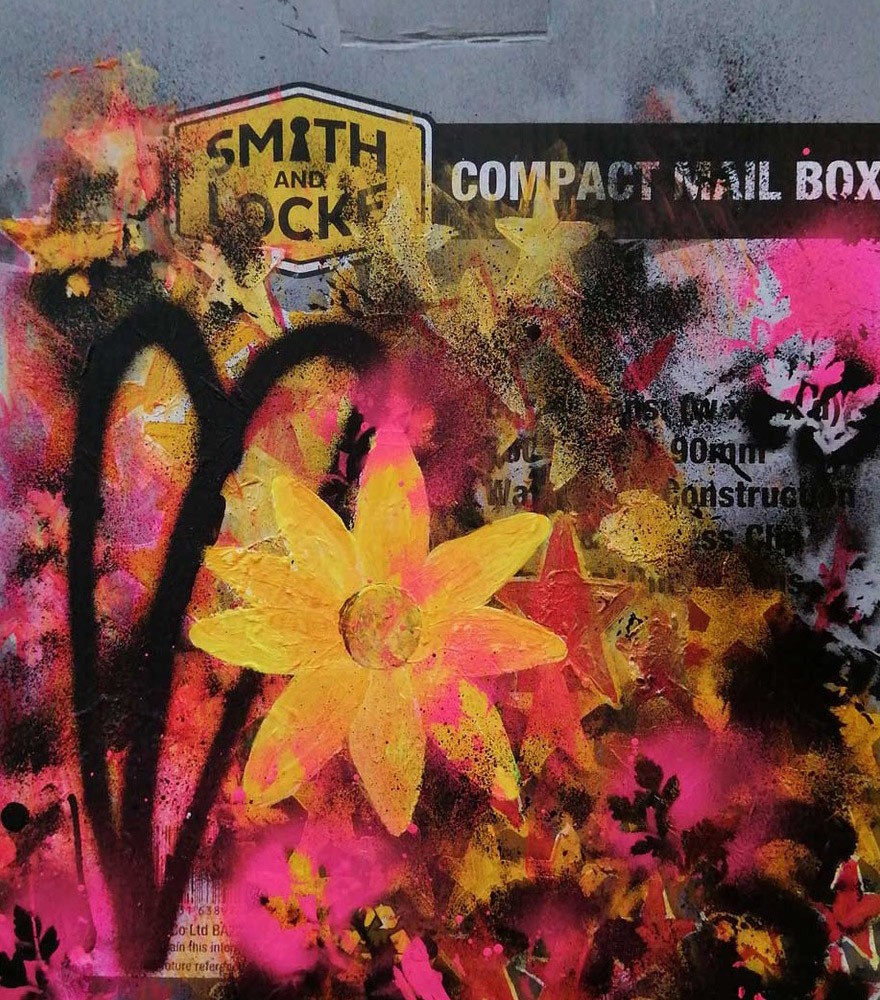 A Flower by Sean Worrall

Sean had always been painting, pieces on the street, pieces on fabric, exhibitions, record sleeves, gig posters, magazine covers, somewhere along the line he started curating art shows, pulling artists together, art shows in squats, in West London basements, gathering together an ever evolving cast of creative people, painters, musicians, gig promoters, art curators, the week-long Eight Day Itch festival was one of many highlights.

In 2011 there was the Stinging Netil, a take over of a whole East London market, bands playing all day, groups of artists taking on the 40 or so market stalls together, one of those artists was painter Emma Harvey. Emma had taken part in a number of Sean's curated shows already, the feel of the Stinging Netil - something that was built on the the legacy or the DIY spirit of the early Art Car Boot Fairs and especially Joshua Compston's seminal Fate Worse Than Death - the feel of the Stinging Netil and artists coming together to make it happen demanded we do more. A gallery space smack bang in the middle of the then thriving East London art thing that was Vyner Street was somehow acquired, the original idea was a collective, collectives never work, Emma and Sean quickly became the driving forces, and between 2011 and the end of 2014 at Cultivate Vyner Street, Sean and Emma, working together, curated a non-stop never-closed, ever evolving programme of art shows.

Hundreds of artists passed though, group exhibitions, solo shows, feminist Riot Grrrl shows (that's was all Emma), guest curators, film makers projecting on our walls outside, street artists, performers, contemporary painters, some just passing through, some like Julia Maddison, My Dog Sighs, Charlie McFarley or Quiet British Accent hanging around for a couple of years. It was all fuelled by the punk rock ethic that kickstarted Organ, a DIY spirit, a defiance if you like.

By the start of 2015 gentrification and the community-killing scurge of property developers had done for Vyner Street, Cultivate became nomadic, shows in abandoned shops, condemned warehouses, in formal gallery spaces, in office blocks and in more recent times during the year of lockdown, a very busy programme of ongoing on-line shows. Through all of this Cultivate founders Emma Harvey and  Sean Worrall remained busy as pro-active painters, exhibiting and taking part in events all over the city and the land, sending art all over the globe

Meanwhile, the last printed copy of Organ hit the streets in 2011, since then Organ has existed at a radio show mostly presented by Marina Organ on Resonance FM and a busy website mostly brought to you by Sean.  Organ still has a worldwide readership, the focus is still very much on the alternative, the underculture, on the art, music, bands and artists the others don't cover that often, the painters, curators and performers doing it themselves, the backstreet art shows, the artist-led exhibitions that would often go completely undocumented if it wasn't for Organ. Still fuelled by the punk rock spirit, the do it yourself ethic that still flows, there are daily features on artists, shows, bands on a website, www.organthing.com so busy there's often no time for such mundane things as proof-reading.

Sean and Emma often exhibit together, they delight in sharing gallery walls or stalls at Art Car Boot fair events and such. They are both very much individual artists though. 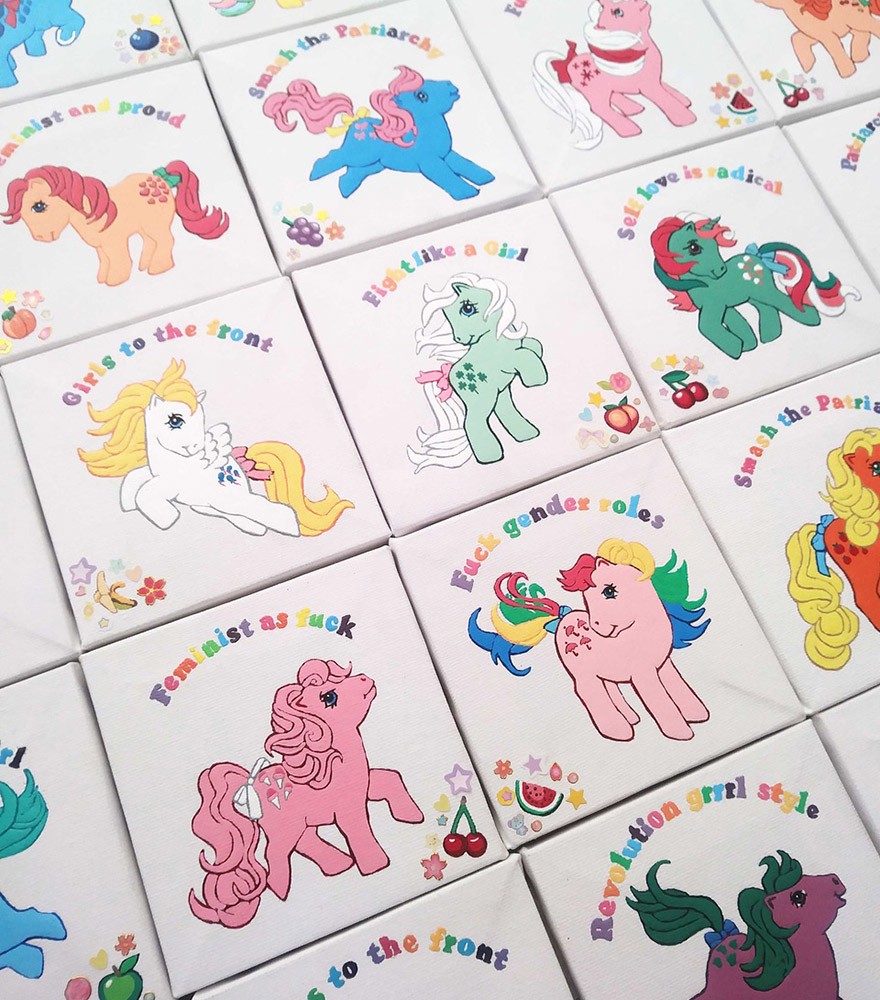 Ponies Against Patriarchy by Emma Harvey

For the forthcoming Flora and Fauna edition of the Art Car Boot Fair Emma Harvey is revisiting her rather engaging feminist riot grrrl flavoured series of 'Ponies Against Patriarchy' paintings, producing a new 'fruity' series on 10x10cm square canvas and only available for sale at the Art Car Boot Fair. Emma will also have some special oil studies painted directly on to vintage flower book plates featuring some new circle paintings that she is currently working on – until we get to see all her large circle paintings collected together on a gallery wall.

Meanwhile I shall be focusing on new paintings and fresh layers of growth, the flora that has been part of my recent output as an artist trying to exist in the gentrification and destruction of East London, I shall be producing a number of paintings on the thoughtlessly discarded boards of greedy estate agents picked up off streets, on the waste material that people just throw out with little regard for these times of drastic climate change, the idea that when we're all gone, Mother Nature will reclaim it all back with her layers of fresh growth. I shall also be presenting the most recent in the ongoing series of daily concluded Ten paintings, a series of paintings on 10cm square canvas that have been evolving in my studio on a daily basis since July 2020. Always on 10cm square canvas, always offered in line with the notions of the Cheap Art Manifesto, at a price of £10, the 30 paintings produced in April will be offered first via the Art Car Boot Fair’

All the latest Ticket Offers News and Events